2015 was a year full of traveling for me, which I was not expecting. Most of the trips was surprise trips from my parents for graduating college, while others were spur of the moment trips with Adam (my boyfriend). However, there was one trip I had planned since March, which at the time was the only trip I thought I would be taking in 2015.

March 2015, I committed myself to run the Disney Wine and Dine Half Marathon. This has been on my bucket- list since I was a senior in high school after my English teacher ran the Disney Princess Half Marathon. In years past I’ve missed the deadline for this particular half marathon, little did I know in past years the Disney runs fill up fast! So, I put the time and date in my agenda back in October of 2014.

Finally, the day had come to sign up for the race. It was like registering for a class, I sat at work in the Admissions Office constantly refreshing the page and thinking, “oh no, what if I don’t get in?!” their was a moment of panic and then relief when it was all said and done. I got in! Now all that was left was to train and the wait until the race in November, which perfectly fell on my birthday weekend as well as the Epcot’s 20th International Food and Wine Festival.

Adam and I booked our plane tickets to Disney back in June. Our flight from Boston to Indianapolis to Tampa was $250 each on Southwest Airlines. We had an early flight out of Boston, which meant it was going to be a long day of traveling.

Both Adam and I took off work on Friday, November 6 to travel to Florida. We left our apartment at exactly 4:30 a.m. after a quick 10-minute ride to the airport and zipping through security we were off. The weather was great and everything was on time. We even arrived early to Tampa, which was nice because we were meeting up with my family who decided to come support me in the race. After meeting up my with my parents and brother we made a quick stop at The University of Tampa to pick up my sister and we were off to Disney!

Once we arrived at Disney our first stop was to get my bib at Disney’s Wide World of Sports at the Wine and Dine Expo, which was filled with Disney running gear. I was a little upset I was unable to get the Minnie Mouse New Balance shoes, but I got light up shoe laces instead, which was awesome because the race was at night. Also at the expo my family signed-up to track my time so they knew where I was the whole race.

What’s really nice about the Run Disney races is that they offer special discounts on all the Disney resorts making the weekend very affordable. We stayed at the Disney’s All Star Movie Resort, which is one of the cheaper resort options. My family has stayed at the Disney All- Star Sports resorts several times when I was little so we knew we were getting nothing fancy, just the basic stuff.

What was different about this resort compared to the Disney All-Star Sports Resort was it was movie themed. We stayed in the Herby Fully Loaded section of the resort and overall it was nice for the short time we spent there.

The Day of the Half Marathon:

The morning of the half marathon I woke up to a filling breakfast of eggs and Mickey Mouse waffles at the resort. After we ate breakfast we decided to go to Disney’s Animal Kingdom. This was because theirs not a lot to do at Disney’s Animal Kingdom  and I had to get my leg tapped and rest before the race, which didn’t begin till 10 p.m., below is a time line of the day.

9:30a.m. : Depart in the Nalepa Circus Van to Disney’s Animal Kingdom. And enjoy a morning full of fun.

Noon : Left the park with Adam and my dad to Disney’s Wide World of Sports to get leg tapped, while dad and Adam had beers.

8:30 p.m. : Get ready for the race and head over to the bus, which took me back to Disney’s Wide World of Sports where the race began.

Once I arrived I was excited I was about to cross another dream off my bucket list. About, thirty minutes later my family showed up because they want to see me start the race and finish. So they came over to where I was and we chatted for a bit before they left. Little did we know a really bad storm was coming that would postpone the race.

About ten minutes after seeing my family I was trying to get into race mode when it suddenly became really cool and windy. People started to line up, so I followed. A good amount of time passed and I got confused as to why we weren’t lining up in our corrals. Then the sky lit up and we heard a loud boom, boom. I didn’t think too much of this. I lived in Florida for six years and knew this was typical Florida weather.

After two hours they told us it was okay for us to run,  we all walked over to our corrals in a very unorganized fashion. Once there I was so excited. I was corral ‘G’ so I had a few corrals in front of me before I got to begin my two-hour jog around Disney. What’s really unique about Disney Run’s is  they want to make the race special for everyone. Each time a corral was set to run fire works would go off, which made the beginning of the race special to everyone and not just that first group leaving.

Finally, it was corral ‘G’. This being my second half marathon I was less nervous about the finishing part because I did it before, also most of the course was flat, which made running easier. Once we left the Wide World of Sports complex there was entertainment right from mile one all the way to mile 13.1, honestly I think I was smiling the whole time! I saw so many character as I ran through Disney. Each mile was a different theme with music from each particular movie. You even had the opportunity to stop and take photos with the characters, which was unlike any race I have ever ran before. I didn’t stop to take pictures since the lines were very long, instead I just took in every second of my dream half marathon.

Finally, I made my way over to Disney’s Boardwalk and took a left into Epcot where the race ended. Only one mile left and finally I could see Chef Minnie and Mickey at the finish, honestly no better way to finish a race in my opinion.

Disney’s Wine and Dine Half Marathon didn’t have your traditional post half-marathon bananas and beer, being Disney they took it to the next level. Yes, their was your free beer at the end, however if you participated in the Disney Wine and Dine Half Marathon you got fee admission into Epcot’s International Food and Wine Festival on top of Disney keeping the park open till 4 a.m. to enjoy drinking and eating around the world. As well as a free $20 gift card to use at the festival.

After the race myself and my family walked over to Mexico where I got chicken tacos and a margarita. The line was probably one of the longest countries (clearly everyone had the same idea as I did, tacos and margs)! After stuffing my face we walked around to other countries, a few rides were open as well as a hand full of characters were around the park taking pictures with the runners.

Soon enough it was 3:30 a.m. and we had to catch the bus back to the hotel. Overall, I really enjoyed the experience and would one hundred percent run it again in the future. As well as participate in many of the other Disney themed runs they offer through Run Disney. 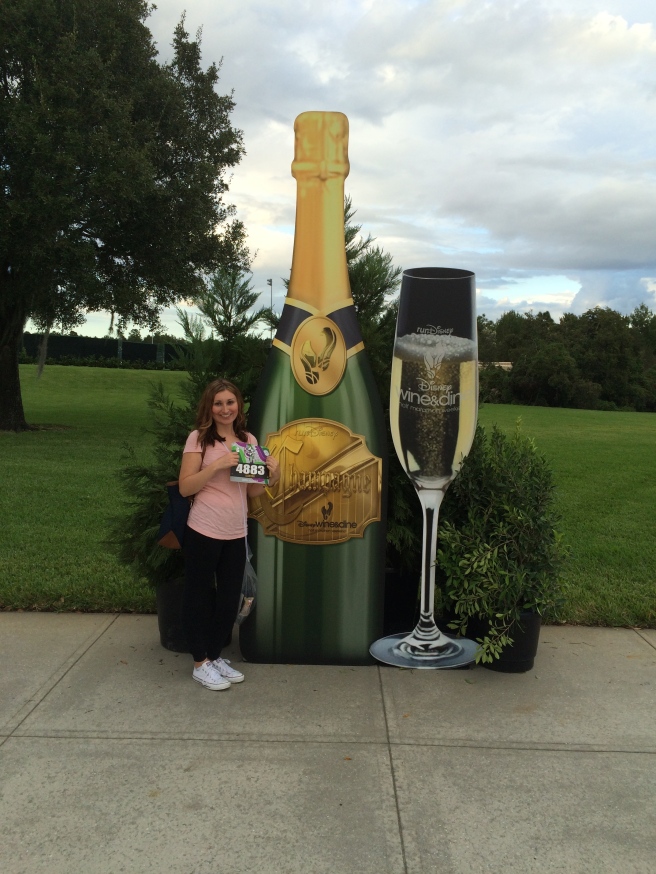 Picking up my bib. 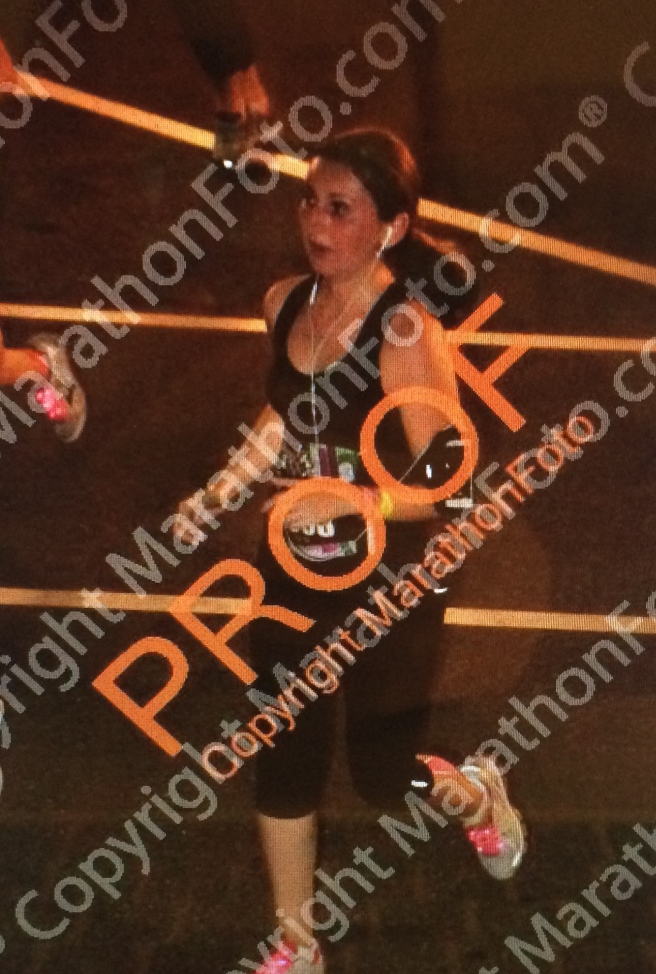 Adam had an awesome idea to surprise me with Tina faces. They kept it a secret from me for weeks.