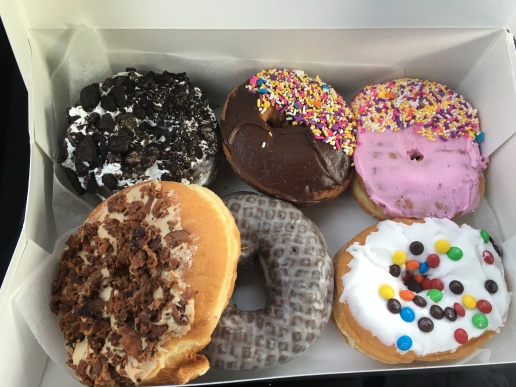 For those of you who are unfamiliar with Kane’s, Kane’s is a Boston staple donut shop with locations in Boston and the original in Saugus, MA. They have everything from coffee and tea to bear claws, pastry’s, cupcakes and their iconic donuts with flavors like Bacon Maple, Oreo and more made fresh daily.

More recently, Kane’s opened a pop-up location in Chestnut Hill from mid February to the end of March. After countless people posted pictures of these mouth watering donuts on my Instagem feed I figured why not give it a try.

I decided to go on March 27 the day before it closed. I got their at 7 a.m. right when they opened and within the time of me telling the man what I wanted, and paying the line was out the door and around the corner. I was shocked! I knew it was popular, but not this popular.

I was only going to get one I promise! It turns out the flavors that morning were too good to pass up! So I got six and figured I would bring them into work and share with my co-workers. With the donuts being large I thought we could cut them in half since I work in a small office. They were a hit.

Overall, I was a little disappointed. To be quit honest I didn’t expect these donuts to be as large as they were. I was expecting Dunkin’ Donut size. After a few bites I got full and they are extremely sweet Just one donut can be shared between two people.

Kane’s was a great experience, but it’s one of those places you only go once. Maybe Kane’s is only good for an Instagram picture and a cavity.

Our house for the weekend. $65 per person!

Staying warm up in Maine. With my staple Bean Boots.