Located at 1825 Collins Ave, Nautilus, a SIXTY Hotel built during the art deco era of the 1950s has been remodeled with luxury in mind. Nautilus features a comfortable, relaxing design which resembles a luxury beach house in Southern France.

Located minutes from the popular Lincoln Road (a fashionista playground) and the South Beach party scene, guest staying at Nautilus have unlimited access the hotel’s private, beach, pool, bar, restaurant, and cafe right on the property. Guest can also take advantage of the hotel’s bike rentals and world-class spa for an additional fee.

Nautilus, a SIXTY Hotel, is a 250-room oceanfront hotel with 51 suites, two signature suites, and one penthouse. All rooms offer spectacular views of downtown Miami or Atlantic ocean.

All rooms were carefully designed with neutral colors keeping relaxation and modern elegance in mind. I can promise you Nautilus will have you swoon upon arrival with its calming, clean colors and high attention to detail.

With the endless amount of amenities on site, guest will have to come back just to enjoy all of them! Check out everything the hotel offers below:

Looking to book a vacation to Miami? Give the Nautilus, a SIXTY Hotel in Miami Beach a try. Odds are you’ll love it!

Looking to take a cruise with standout entertainment, their own private island, larger than average staterooms, and ships with unlimited magic? Then look no further to the Disney Cruise Line.

Since Disney’s first voyage over 20 years ago, it has expanded to four ships sailing to ports worldwide including the Bahamas, the Carribean, Europe, The Mediterranean, Alaska, Canada, Mexico and more!

Your Disney experience starts right when you walk on the ship with Disney crew members welcoming families by their last name. From there guest are free to explore the vessel! The ship itself boasts pure elegance with tasteful Disney features.

The cruise offers endless unique features other companies don’t offer like their private island on Castaway Cay in the Bahamas, rotational dining at themed restaurants, on ship firework show, themed voyages such as their Halloween Cruise, A Very Merrytime Cruise and Star Wars Day at Sea, characters appearances, and of course the Mickey Mouse shaped pool.

If you’re over the age of 18 you have the option to enjoy the secluded adult area on Castaway Cay, adult dining options, top of the line spa services, nightclubs and of course top notch Disney entertainment.

Planning on getting hitched? Disney Cruise offers destination wedding packages on the ship or on their private island. Learn more here.

What are you waiting for? Start planning your Disney Cruise here!

Take a stroll down Midtown in New York City and you’ll walk into the Roosevelt Hotel located at 45th E 45th Street. With its 1920s charm, grand entrance, and five-star hospitality you’re guaranteed to enjoy your stay.

You may be familiar with the Roosevelt as it’s the backdrop to many well-known Hollywood films and TV shows including Mad Men, Maid in Manhattan, The French Collection and more. But what those movies don’t show is traveler experiences in the historic hotel.

Walking into the hotel guest will walk up a flight of stairs and into America’s past with a breathtaking grand foyer, an eye-catching chandelier, sitting area, bar, and gift shop. The lower level includes shops, hair and nail salons (perfect for a girls weekend). While the 19th floor hosts a private rooftop bar Mad46 with their signature drink the MadMojito.

The history is shown throughout the hotel with portraits of Theodore Roosevelt, old fashion elevators, and 1920s décor in both the hallways and rooms.

The rooms are small (be prepared) but hey you’re in NYC, you’re not supposed to be spending time in your room!

Although the rooms were small they were clean and comfortable. We stayed in room 1708 and we really enjoyed our stay!

Learn more about the Roosevelt here! 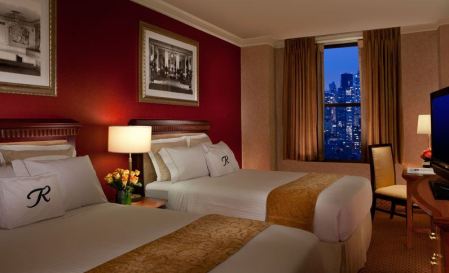 Among its historic landmarks, you will find D.C. offers a variety of dining options perfect to satisfy any foodie! The food scene in D.C. matches its diverse culture from small cafe’s near national landmarks to boutique style restaurants in Georgetown to larger chain options near the center of the city and more!

Having recently visited D.C. I had the pleasure of experiencing a few different restaurants and cafe’s that offered large menus with a variety of choices. Check out my favorites below:

Martins Tavern: Ever wanted to dine with the president? Well here’s your chance (sorta)! Martins Tavern has seen its share of former presidents including a Henry Truman, The Bush Family, JFK and more. If your lucky you can even dine in one of the many tables the presidents sat in and let’s not forget the oh so famous booth where John proposed to Jackie. If you like a bar atmosphere, with comfort food and presidential history then I would recommend checking out Martin Tavern! 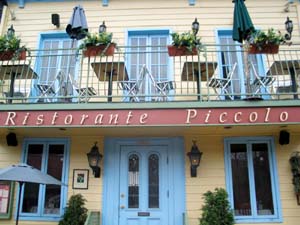 Founding Farmers: Looking for a modern restaurant with homemade dishes? Then I highly recommend checking out Founding Farmers. In 2005 Mark White a third -generation farmer and the president of the NDFU  came together to showcase their passion by supporting their local farming community. That passion has led to having freshly sourced produce and more from over 40,000 farmers to the kitchen at Founding Farmers where all meals are prepared from scratch! I had the creamy vegetable bacon bucatini, which I gave two thumbs up. (pretty cool place right!?)

The Don CeSar “Pink Palace” located in 3400 Gulf Blvd, in Saint Pete Beach, Florida makes you feel like you walked into the Great Gatsby era with its 1920s charm.

The hotel’s early days saw guests such as F. Scott Fitzgerald, Clarence Darrow and more flocking to the sandy beaches of west Florida. The hotel was converted to a hospital during the war era and renovated back to a luxury resort in the 1970s. Since then the hotel has had its share of celebrities, films and more. Learn more about The Don CeSar’s history here!

The resort offers 277 guest rooms and 36 suites, which are newly renovated with breathtaking views of the Gulf of Mexico and surrounding St. Pete. The Don CeSar runs on the pricier side but offers special package deals throughout the year. The resort also offers two fine dining restaurants, an ice cream parlor and we can’t forget room service for those midnight snacks!

Looking to get hitched? The Don CeSar offers select wedding packages for the special day. Check out all the details here.

After visiting myself and falling in love with the 1920s charm (and of course the PINK) I would give the resort 4.7/5 stars.

Families young and old love the entertainment and hospitality that Disney has to offer while staying at Disney resorts. That’s one feature Disney is good at and keeps guests coming back year after year, but what many guests visiting Disney theme parks and hotels don’t know is they can now travel to Hawaii to experience Disney’s Aulani Resort and Spa nestled twenty minutes from Waikiki in Oahu, Hawaii.

Aulani Disney resort and Spa was opened in 2011 and was named Travel & Leisure’s 2014 World’s Best Winner for Top Family Resort in the United Stated. With its Disney charm and Hawaiian touches, this resort will not disappoint Disney fans alike looking to embark on a relaxing getaway with some of their favorite Disney characters.

With over a hundred: one and two bedroom suites looking over Disney’s private Ko’Olina Lagoon guest can get a perfect view of the beautiful scenery that Hawaii has to offer. The resort also offers villas for larger families looking for access room, and kitchen areas to cook their own food. Rooms vary in price per night depending on which room guest choose and when they will be traveling, however Aulani offers special seasonal rates and packages through the year.

The resort also includes several amenities such as Aunty’s Beach House, which is a kids play area with crafts, activities and character meet and greats. Looking to cool off? The resort offers a handful of pools to choose from including adult only areas, a lazy river, a coral reef lagoon for snorkeling and much more. If the family is looking to get sometime at the beach no need to leave the resort, Aulani has its own private lagoon with beach chairs and beach rentals ranging from $15 to $30 USD depending on the rental.

Aulani also offers excursions around the island, which can be booked prior to arriving or as soon as guest arrive. A list of daily activities can be found in the lobby and is a great way to know what will be going on throughout the day.

Disney’s Laniwai spa is an experience like no other. I highly recommend any of their spa treatments to anyone looking to relax. Don’t forget to arrive an hour before your appointment to enjoy Kula Wai: Outdoor Hydrotherapy Garden, which will leave guest relaxed and rested. Aulani offers guest a 24-hour fitness center, with morning fitness classes held on the beach. I recommend arriving fifteen minutes prior to the initial start time because classes fill up fast.

What would a Disney Resort be without the entertainment? Aulani does a fantastic job incorporating just enough Disney without taking away from the Hawaiian traditions and culture. There are Disney movie nights, story telling under the stars as well as a Disney Hawaiian Lulu featuring some favorite Disney characters.

Looking for something to eat? Aulani has three main restaurants all of which include different themes and menus. For a couples night out I recommend “AMA-AMA’, which overlooks the lagoon and is a great spot to try some local food and watch the sunset. For families I recommend MAKAHIKI, which is a typical buffet style setup with local Hawaiian dishes. What’s unique about MAKAHIKI besides its family-dining atmosphere is that Aulani offers a Disney character breakfast and brunch, great for families of all ages. I recommend booking in advance because this is a popular restaurant in the resort.

Guest who are not in the mood for a full course meal can try one of Aulani’s bars, snack shacks, cafes, or shaved ice station. Don’t forget to stop by LAVA SHACK for Disney’s signature Dole Whip!

For more information and what Aulani has to offer go to:http://resorts.disney.go.com/aulani-hawaii-resort/